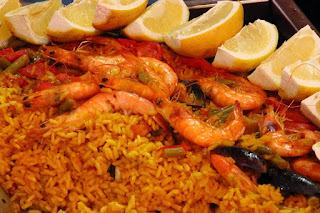 My friend, back from a holiday in Valencia in Spain, is a convert to paella. She was looking around for a recipe that packed as much flavour as the dishes she had eaten in Spain. After a bit of trial and error, she came up with this.

1. Put the saffron threads in a large, wide, heavy-based pan over a moderate heat and stir constantly until they just begin to give off their aroma. Add the stock and bring to the boil. Remove the pan from the heat, cover and set aside to infuse.
2. To prepare the squid, pull the head, tentacles and insides from the bodies. Discard the head and the hard beak from the base of the tentacles. Pull out the clear quill from the bodies, and discard. Use your fingers to rub the thin grey skin from the bodies, holding them under running water. Slice the bodies into thin strips and chop the tentacles. Set aside.
3. Heat 1 tbsp of the oil in a frying pan. Add the monkfish pieces and quickly fry on all sides until lightly browned. Remove the fish and set aside. Add the remaining 1 tbsp oil to the pan. Add the garlic, onion and paprika and cook over a moderate heat for 2 minutes, stirring occasionally. Stir in the red peppers and continue cooking for about 3 minutes or until the vegetables are softened but not brown.
4. Stir in the rice so all the grains are well coated with oil. Bring the saffron-infused stock to simmering point and add half of it to the rice. Stir, then bring to the boil. Reduce the heat to low and simmer for 5 minutes or until the liquid is almost all absorbed.
5. Add the rice mixture to the stock remaining in the large pan. Gently stir in the tomatoes with their juice, the peas and monkfish pieces. Arrange the mussels on the top. Simmer for about 5 minutes. Very gently stir in the squid, then simmer for a further 15 minutes or until the rice is tender and all the liquid has been absorbed. Season with salt and pepper to taste.
6. Remove the pan from the heat, cover and leave to stand for 5 minutes. Discard any mussels that have not opened. Sprinkle the top of the paella with the parsley and serve.

Paella is best cooked in a proper paella pan (but it's not essential). Here's one that has good reviews:
World of Flavours Mediterranean Non-Stick 46cm Paella Pan


Subscribe to Kitchen Cook and we'll email you every time the website is updated. All you have to do is pop your email address in the 'subscribe' form in the panel on the right.
Posted by Kitchen Talk at 16:49:00