TODAY I am taking a step back into my childhood to bring you a recipe for Devonshire Splits. My father was a bellringer and belonged to a team which competed all over the county. Often after a ringing competition there would be tea laid on in the village hall. These were sumptuous spreads with all kind of sandwiches, cakes, sausage rolls and pasties.

Inevitably there would also be Devonshire splits. In recent years these have lost favour to scones. I love a nice cream tea with scones but occasionally it's good to ring the changes (geddit?) and use a split instead.

A Devonshire Split is a smallish yeast bun with a soft top dusted with flour. They are cut at a slant - not all the way through - to make a wide opening for the filling of cream and jam so they look like a bright Devonshire smile.  If the jam is home-made, so much the better. As for the cream, you can use clotted, thick double cream or whipped double cream, whichever you prefer.

Here is a Nigel Slater recipe. 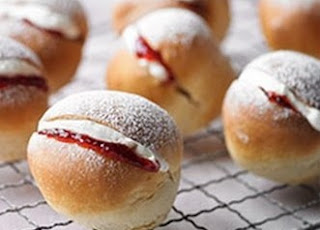 Sift the flour and salt into a large bowl. Sprinkle the yeast and caster sugar into the flour. Warm the butter and milk in a small pan until the butter has melted. Let the milk cool slightly, until it is just about cool enough to dip your finger in.

Pour enough of the milk and butter mixture into the flour to form a soft dough. You may not need all of it. The dough should be soft and slightly sticky. Mix it with your hands to form a ball.

Tip the dough out on to a floured work surface. Knead the dough lightly for about five minutes until it feels slightly elastic. Return to the bowl and cover loosely with a clean tea towel or clingfilm and put in a warm place.

After an hour or so the dough should have doubled in size. Turn the dough out once more on to the floured board and cut into 8 to 10 pieces. Roll each one into a ball, placing them on a lightly floured baking sheet as you go. I find this easiest in the palm of my hand, but other people like to roll them on the board.

Set the oven at 200C/gas mark 6. Dust the buns lightly with flour and leave to rise slightly, covered by a tea towel, for 10-15 minutes. Bake for 18-20 minutes until they are pale gold on top and sound slightly hollow when tapped on the bottom.

Remove the buns from the baking sheet to a cooling rack for a few minutes. Serve while they're still warm.

When cool, split and add the filling.

Subscribe to Kitchen Cook and we'll email you every time the website is updated. All you have to do is pop your email address in the 'subscribe' form in the panel on the right.