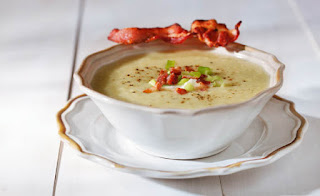 AS the weather turns chilly what could be better than a hearty warming soup? Leeks are in  season now so why not try a delicious leek and potato soup from the BBC Food website? This recipe adds bacon to make it even more tasty and substantial. Serve it with hot crusty rolls and butter.

Melt the butter in a large pan, then fry the bacon and onion, stirring until they start to turn golden. Tip in the leeks and potatoes, stir well, then cover and turn down the heat. Cook gently for 5 mins, shaking the pan every now and then to make sure that the mixture doesn’t catch.

Pour in the stock, season well and bring to the boil. Cover and simmer for 20 mins until the vegetables are soft. Leave to cool for a few mins, then blend in a food processor in batches until smooth. Return to the pan, pour in the cream and stir well. Taste and season if necessary. Serve scattered with tasty crisp bacon and eat with toasted or warm crusty bread on the side.

Subscribe to Kitchen Cook and we'll email you every time the website is updated. All you have to do is pop your email address in the 'subscribe' form in the panel on the right.